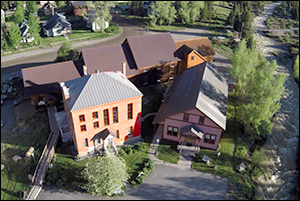 In 1985, the Board of Directors sat down and came up with a five-year plan. In that plan was to build an archive building to get our archives out the basement of the Courthouse and to build a new museum building to show off our extensive mining collection. We had inherited to collection after the Zanoni Brothers Museum building downtown collapsed from snow. Our museum was in the old County Jail and the only space for displaying our collection was in two little rooms in the basement.

Well, the five-year plan turned into a ten-year plan pretty quickly because of pesky events like to Town Hall burning down and the Sunnyside Mine shutting down and intending to demolish and reclaim the historic Mayflower Mill site. We managed to save both the Town Hall (winning a National Honor Award from the National Trust for Historic Preservation for it) and the National Historic Landmark Mill.

So, back to our five-year plan: it was now 1998 and we had built our Archive building (putting finishing touches of varnish on it literally minutes before we hosted the State Historic Records Advisory Board). Now, we wanted to build our new Mining Heritage Center, but that would take money and a leap of faith. We rolled up our sleeves, sold some property, wrote some grant applications, and got a Congressional Appropriation, and off we went!

At the top of Minnie Gulch sat the Caledonia Boardinghouse. It was built against a talus slope and the rockslide was slowly destroying it. For years we had tried to save it in place, but it was apparent that it mountain was winning and we were losing, so we tried to figure a way to incorporated it into our new museum. We went to the owners Ken Knapp and Wayne Williams and asked them to donate it to us, and graciously, they did, and, even more astounding, an anonymous donor who loved the building stepped in to pay for the move. With the help of the Town and County crews and Bill Alsup's crane, the building was disassembled in just two weeks and moved to Courthouse Square where it was reassembled in just two months. Because the Boardinghouse was built of hand-hewn logs, each piece was designated a color coded number so that it could be put back together exactly as it came apart. So, now we had this huge display space and we quickly filled it up, with volunteers working around the clock to build the best Mining Museum in the country.

We had our Grand Opening in 2005 with a benediction by Dolores La Chapelle and have been going strong ever since. As for that huge space, we had filled it up so with an appeal to our membership and another anonymous donor we raised the money to build a new addition in 2015.

Our crew continues to work every weekday morning in the winter to build new exhibits and to fine-tune others, and it has truly turned into the best mining museum in the country.

Ask about our Heritage Pass.
Save on a tour package; Old Hundred Mine Tour, the Mayflower Mill and Mining Heritage Center & Jail.