By George Niederauer and Jerry Hoffer ... 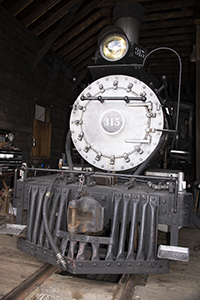 The Silverton Northern Engine House is a contributing structure within the Silverton National Historic Landmark District. The Silverton Northern Railroad was incorporated in 1895; thirteen years after the Denver and Rio Grande Railroad (D&RG) arrived in Silverton from Durango. Railroads were vitally important to the development of mines, especially into regions of lower grade ore, and as lifelines in supplying the needs of the people in the mining communities like Silverton. At one time Silverton was served by four railroads. First to arrive in Silverton was the Denver and Rio Grande railroad, in 1882, which refused to build to mining communities higher into the mountains beyond Silverton. As a result, Otto Mears, the "Pathfinder" of the San Juan's built two railroads that journeyed to the more remote mining and mill sites. The Silverton Railroad was the first of these lines, incorporated two years later in 1887. It ran northwestward up Mineral Creek to the Red Mountain Mining district. The Silverton Northern was the line servicing the area northeast up the Animas River corridor to Animas Forks. Operations eventually ceased on the Silverton Northern in 1939. The remaining Silverton Northern track, engines, and some rolling stock was sent to Alaska in 1942 for use on the White Pass & Yukon railroad to help with the war effort in building the historic Alcan Highway. Today, the Durango and Silverton Narrow Gauge Railroad (D&S) operates over the 45 miles of track between Durango in La Plata County and Silverton in San Juan County. The railway is a federally designated National Historic Landmark and is also designated by the American Society of Civil Engineers as a Historic Civil Engineering Landmark.

The Silverton Northern Engine House and several sections of roadbed leading to the ghost town of Animas Forks are all that remain of this vital railroad's history. The San Juan County Historical Society (SJCHS) and the Durango Railroad Historical Society (DRHS) formed a partnership to establish a railroad historical park, centered on the Silverton Northern Engine House. The two-stall engine house is being restored to provide a home for locomotive D&RGW 315 and for the railbus Casey Jones, owned by SJCHS, and to restore, maintain, and store the 315 and various railcars owned by DRHS or SJCHS. The 315 is operated occasionally on both the D&S and the Cumbres & Toltec Scenic railroads.

The first phase was to restore the locomotive and car pits in the engine house and the large doors, then to add about 1800 feet of track along Cement Street for operating and displaying equipment, with a spur into the engine house and a connection to the D&S track. The second phase was to assess the building for a complete restoration and addition of insulation and a bathroom, a wood shop, and a metal shop. The third phase, now underway, is to restore the exterior shell: roof, walls, and foundation, including strengthening the roof structure. The adjacent oil shed has been reconstructed and repurposed as a combination office, library, and break room. The fourth phase will see restoration of the interior and painting the exterior. Meanwhile, DRHS is currently constructing a new set of parallel tracks to display a dozen restored rail cars on D&S land between the engine house and the D&S depot. An open shed will be built over the display area, and a raised platform will provide access to the floors of the cars.

DRHS has restored eight cars so far: drop bottom gondola, high side gondola, cattle car, sheep car (double deck), flatcar, refrigerator car, bunk car, and flanger (a type of snow plow). It will be restoring a boxcar, a tool car, and a tank car. SJCHS restored a Silverton Northern caboose and displays it next to the Mining Museum and has a D&RGW boxcar on the restored scale track at the old Rose-Walsh Smelter site. It also has a very old Silverton RR Baggage car to be restored. An interpretive sign is created for each restored car.

The railroad historical park is supported by other organizations. The Galloping Goose Historical Society of Dolores permanently loaned most of the rail. The Town of Silverton permitted laying track on the Cement Street right of way. D&S allowed a connection to its track and granted an easement for the railcar display tracks.